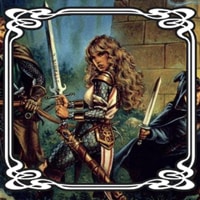 Last game night one of my players was absent and it really impacted the story in a negative way. So I wondered: What is the best way to deal with absent D&D players? I decided to do some research and write a helpful post on how to deal with missing players.

The best way to deal with absent D&D players is to sit down with your group ahead of time and make clear agreements. This way everyone has already agreed to how absence will be handled and the group shares responsibility for providing the solution.

There are seven main solutions to choose from, which all have pros and cons:

1. The Character is Missing from the Party for an External Reason

The first solution is an easy one. At the start of the session think of a perfectly reasonable explanation of why a party member is absent. There are plenty of valid reasons you can come up with. And you can use these reason more than once if a player misses sessions regularly.

For instance, a reason that could affect the whole group is having their employer be a powerful sorceress, wizard or deity who simply teleports party members to where they are most needed. Of course, these powerful beings don’t have to explain their actions to mere mortal characters.

You could also choose more personal reasons for characters going missing. If you can tie these reasons to the characters’ background that would be even better.

The parties fighter might be drunk at the tavern again, trying to drown the memories of battle. Or the thief might have to hide from a powerful bounty hunter. Maybe your parties wizard has contracted a magical disease that makes him fade from reality from time to time. And your cleric could be caught up in a mandatory spiritual ritual that will take days to complete.

Ask players to think of the coolest explanation they can come up with and use it during the game.

2. Letting the DM Play the Character as an NPC in the Background

This solution is probably the one that most groups choose and it has many advantages. Story-wise if the DM plays the character, not much changes. Characters aren’t zipping in and out of the story and the party stays together. But some DMs might feel like it is a big responsibility to play the character of a player.

Treat the character as an NPC and decide ahead of time that no action you take will cause the character to die or cause a major setback unless you have a total party kill (which should be extremely rare).

During combat, I usually have NPC’s fighting at full HP but they only get one action every other round. Also, they only get half the powers, spells and so on of a PC. And they never come up with solutions for the obstacles I put in my players’ path.

3. Use a style of Play Called West Marches

The West Marches is a style of play where there is no regular playing time. It is the players’ job to schedule the next session. There is also no regular party.

Each game – from a pool of ten to fifteen players – a group of four to six players get together to explore the wild lands around a settlement. Finally, there is no regular plot. Each session is an adventure on its own. The adventure must reach a conclusion by the end of the session and characters finish at the settlement where they started.

4. Choosing Another Player who can Play the Character

This is a solution I have found multiple times while researching this article, but it is not one I recommend. Don’t let another player run the character. If the character dies it creates tension in the group. And that will negatively impact the game more than anything else ever will.

Remember, whether or not a character dies is just about the adventure your playing right now, but having a gaming group of good friends that will play for years to come (or decades in my case) is infinitely more important.

You can have another player roleplay the character if you are planning on doing non-lethal challenges. Not every session has to be about defeating monsters. Our webshop has plenty of non-combat challenges such as puzzles, riddles, politicics, and fortunetelling. Don’t be afraid to change it up.

5. Make the Story About the Missing Character

This one you probably shouldn’t use too often. But it can be fun to have one character go missing for no apparent reason and turning the session into a Sherlock Holmes type of detective. Only do this if you are comfortable coming up with a detective story on the fly.

6. Splitting up the Party

It can be hard to think of an external reason why characters should suddenly leave the party. Especially when you are in a dungeon or in the wilds. But you can always have some event cause the party to split up.

In a dungeon, a trapdoor could whisk a character away. In the flatlands, a storm could strike. Just make sure the players know out of character that it is your plot device to explain a players absence and that they don’t have to spend the rest of the session looking for their missing friend.

The term ‘grim portent’ is used in an RPG called Dungeon World to explain a looming threat that gets progressively worse if characters don’t act to prevent the ‘impending doom’. It is a way of creating plots that works very well with any gaming system. For example:

Bob just turned into a Zombie and now you need to catch him before he reaches town.

Get the TOKENS Zombies pack here.

When you are running multiple grim portents simultaneously, characters can only stop or delay one grim portent per session. The other portents escalate to the next step. So if the players decide to spend a session investigating the tremors people have been talking about, they might stop the entire impending doom from coming to pass. But the other grim portents will advance one step.

If a player is absent, you can have their character leave the party and go of to try and delay another grim portent. At the beginning of the next session, have that player make a check.

If successful, the character has somehow managed to prevent the grim portent from advancing. This way, there is a good reason for a character leaving, and the group will feel like the player has contributed something. It helps the group view the player in a positive way, and helps the player be more motivated to attend the next session.

In this section, we’ll look at some suggestions for making clear agreements with your group and preventing irritations from derailing what is supposed to be a fun evening for everyone.

Should I Punish D&D Players for Missing Game Sessions?

Set a good example by never getting angry with your players or punishing them for not showing up for a gaming session. Taking away XP or excluding them from the party isn’t going to make them want to attend the next session.

There is usually a good reason for players missing a game. Work and many responsibilities take precedent. And players that don’t bother to tell you they’ll be absent could be doing so because they feel it’s a difficult conversation they would rather avoid.

Some players lack the necessary social skills. And some are just really bad at planning stuff. In short: The reason for not attending is almost never personal. So just keep an open non-judgemental conversation going.

Also be aware that there is a psychological effect called the ‘fundamental attribution error’ which says that the less we know about a person, the more likely we are to attribute a mistake to the person and not the situation.

So the less your group sees a player that can’t attend, the more likely they’ll be to blame the person, and not the situation. Just reminding everyone to be inclusive and setting an example really helps.

How do I Decide how often D&D Players can miss Gaming Sessions?

Of course, sometimes a player misses so many sessions that it becomes a problem for the whole group. So how do you set limits to how often players can miss gaming sessions?

If possible, have an open group discussion about the minimum required attendance for players to stay in the game. It’s best to have this discussion during your first session or during session zero. That way, players will tell the group how often they believe to be able to attend and set expectations.

The negotiations should be between all the players. Not just between the player and the DM. So invite everyone to join in the discussion. If you ever need to discuss whether they can stay with the group,  you can refer to what players have already agreed upon.