Dungeons & Dragons is a cooperative game. Without teamwork players will fail at most tasks and D&D puzzles. Only by depending on each other can they overcome the puzzles and challenges set before them and achieve victory!

At least, that’s how it is supposed to go right? But when you are introducing a puzzle to your D&D game, what often happens is that one player hogs all the puzzle pieces while the others sit back and wait until the puzzle challenge is over. More often than not, there is no D&D in Teamwork. So how do we fix this?

In this article we take a look at how to create D&D puzzles that require teamwork. But before we do that, it’s important to understand why some players won’t participate in teamwork when the party comes across a puzzle.

Everything in D&D is a Puzzle That Requires Teamwork

First off, everything in Dungeons & Dragons is a puzzle in disguise. Allow me to explain: Let’s say, your party is standing on top of a low wall facing a thousand angry elves who are aiming their longbows at you. Will your party stay on top of that wall or duck behind it?

It may seem like an unimportant question. But really, clever players puzzle out that it is probably safer to hide behind the wall before the volley of arrows strikes. And if they care about teamwork, they’ll inform their teammates of their clever solution.

This encounter is really a puzzle in disguise, and making clever decisions helps the whole party stay alive. It gets even better if players get the drop on a monster and figure out tactics that play to each character’s strength. Rushing in mindlessly and hacking at a monster until someone drops is for noobs and murderhobo’s.

Now think of every single challenge you have ever come across while playing D&D. Traps, social encounters, chases, politics, exploration, fights… Aren’t they all just puzzles in disguise that are solved better with teamwork?

Jep, D&D is just a big cooperative puzzle game, but some puzzles are better disguised than others. This is important because in my experience, there are two main reasons why players don’t want to participate in puzzles.

By understanding that everything in D&D is a puzzle, you can easily overcome these criticisms and create D&D puzzles that engage the whole party. Here’s how.

Create Teamwork by Giving Each Player a Task

Some players won’t participate in teamwork because they feel D&D puzzles only challenge the player, not the character. They argue that their stats should matter. And they would be right.

When a party fights a monster, both their individual character statistics AND how they solve the ‘puzzle’ as a team, determines the outcome. The best fights (aka puzzles) challenge both the party and their characters.

The same goes for when you introduce an actual puzzle in D&D. Make sure that each player can try to solve the puzzle, but also try to incorporate their skill checks and stats somehow. Some examples:

If players really aren’t into hardcore puzzling, you can easily incorporate challenges that will keep them happy and are essential to successfully solving the puzzle. They might not think they are solving a puzzle, but you don’t have to tell them that.

You can also tie these skill and ability checks to mistakes the players make when trying to solve the puzzle. For instance, every time Alabastron makes a mistake in solving the puzzle, the pressure plate resets, another lever appears on the ceiling, or a new wave of enemies attack. In short: Engage everyone in teamwork by playing to each character’s strength.

Playing to each character’s strength is all fine and well, but no player always gets his way. Not everyone likes a chase. Some players prefer social encounters over combat. You just can’t please everyone all the time. Sometimes players need to suck it up and put the needs of the group before their own.

If you really wish to force players to actively solve a puzzle as a team, you can always assign individual puzzle pieces to each character. This way, each PC can magically only manipulate a piece of the puzzle. Only by working together will they be able to solve the puzzle as a whole.

In the next paragraphs I describe three ways you can force your party to solve a D&D puzzle through teamwork.

I’ve created a D&D puzzle called Runestone Puzzles which is available in my DungeonVault webshop. Check it out if you’re interested. This puzzle uses three different colour runestones which make up the puzzle pieces. 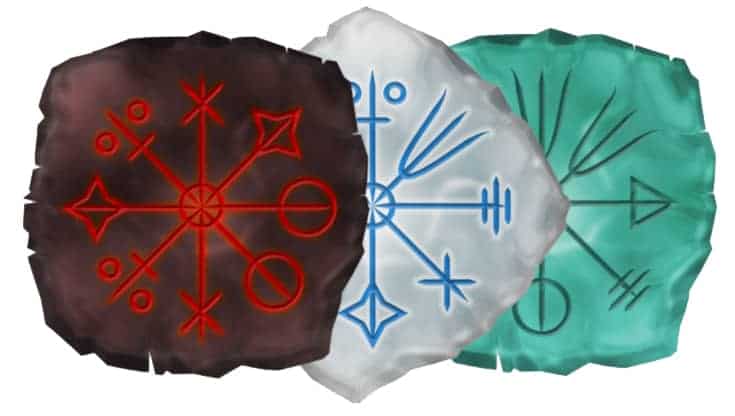 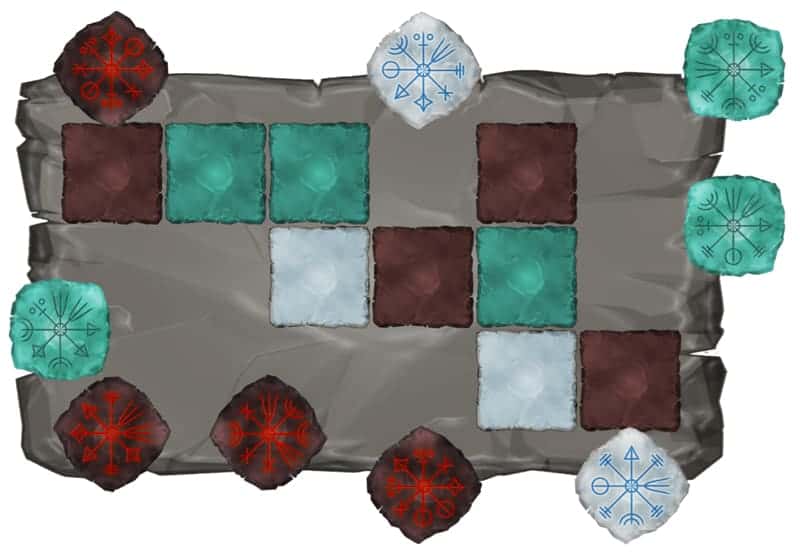 PCs must place the runestones on the board in a way that all rune symbols in both horizontal and vertical direction match. Because each character can only manipulate a part of the puzzle pieces, they can only solve the D&D puzzle through teamwork.

Another variation where you can force teamwork is by giving each player a subset of the puzzle board. I’ll illustrate this with Lock Puzzles; another puzzle you can find in my webshop. 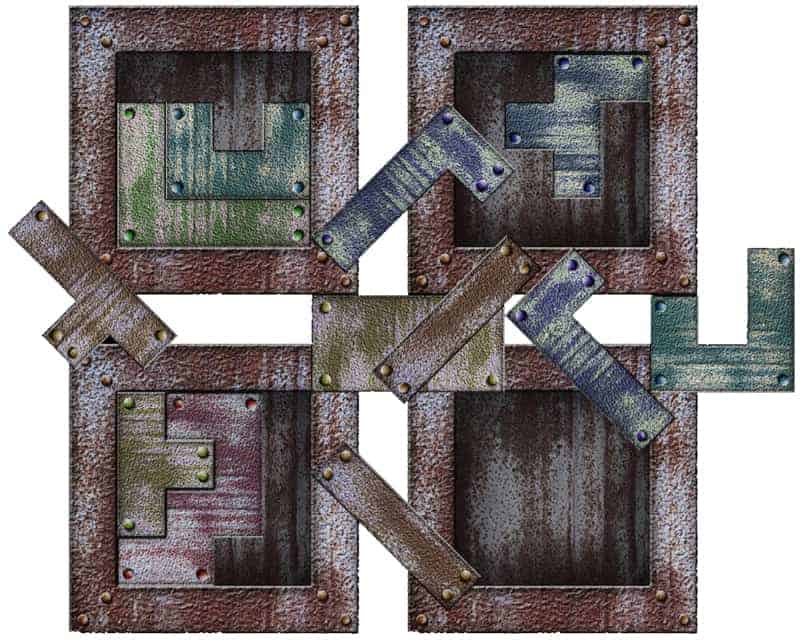 In this setup, the four players have access to all the puzzle pieces. They each get one puzzle board which they must fill completely. There are many ways to fill a single board, but there is only one way to fill out each of the boards completely. Players must trade puzzle pieces and cooperate to fill out each of the boards. In the beginning a player who has a solution for themselves might not want to give up their pieces, but they’ll soon find that the only path to success lies in teamwork.

A third example uses Rune Puzzles. In this setup you split the characters up into different prison cells. One character can see a Rune Puzzle below, written on the wall of his prison cell.

The characters can communicate with each other and must describe which letter corresponds with each rune symbol. But because they can’t show the symbols directly, describing them is going to require a lot of teamwork and listening skills. Once, the character has translated the main puzzle each player can discuss their possible solutions.

Paradoxally, splitting up the party, or handing out individual hints or puzzle pieces, is one of the best ways to force teamwork. When players realise there is no way they can get around cooperating in order to solve the puzzle, they will have to work together.

Some groups will love it. People pay loads of money for escape rooms and forcing PCs into teamwork with a D&D puzzle is very similar. But others groups will retaliate hard. Forcing players to do anything they aren’t into can ultimately be seen as railroading. And the important thing is that everyone is having fun.

If your group really doesn’t enjoy being forced into teamwork, I wouldn’t recommend it. You can always give each player a task that they do like to accomplish. Their contribution will still be essential to the overall success. And sometimes it’s okay if not everyone joins in. There are plenty of challenges in D&D where one player takes the spotlight. Why should puzzles be any different?