So you’ve been hearing about this game called D&D for a while now, and you’re considering getting into the hobby.

But is D&D fun? Dungeons and Dragons is played by over 13 million people from ages 6 and up. It appeals to many players for a variety of reasons such as the storytelling, world-building, simulated combat, magic, having fun with friends, and escapism.

Our survey shows that the top reasons players find D&D fun are:

Plenty of people love D&D. But that doesn’t necessarily mean that it’s right for you. So here are my 8 ways to help you decide if D&D is for you.

I remember the first time I played D&D like it was yesterday. (In reality, it’s over 25 years ago). A friend of mine bought a copy of Dungeons & Dragons. We had:

It took some experimenting and a lot of mistakes, before we started to get things right. But that didn’t matter, because we were building dungeons and slaying dragons.

Today things are much, MUCH easier those wondering if D&D is for them. You can just go on youtube and watch experienced players enjoy the game. There are whole series where you can follow along professional D&D players. And yes, that’s a thing now.

Here’s an example of a great show called critical role, where voice actors play Dungeons & Dragons. (Just watch at least ten minutes to get a real sense of how the campaign begins) This is just one example of play, but they have entire campaigns you can follow along with.

These people are having fun.

But is the kind of fun you would enjoy?

Youtube is also a great place to learn about rules. Which is nice because Dungeons and Dragons has a lot of them. There is a video on virtually every rule in the game and if you ask your question on a facebook group, you get great answers within seconds. Also, every edition of D&D has become easier to play. And you can start playing with very little knowledge.

There is a downside to seeing players with so many years of experience. Some new players believe that they have to meet those high standards. But really, you don’t. The bar for having fun with D&D is very low. If you get a group of enthusiastic people together and activate their imagination, you are going to have fun. Guaranteed, there’s just no way around it.

2. Join a Tabletop Game and Have Fun as a Guest D&D Player

The most obvious way to see if you’d have fun playing Dungeons & Dragons is to just go and join an D&D game in your neighbourhood. But that can be easier said than done. Here are some suggestions for finding a group:

Joining an existing group is the best experience. Other players will help you along, but if you find this option a bit intimidating or can’t find a group, there are other ways to break into the game.

3. Join the Fun as an Online Guest D&D Player

Joining a game online is certainly a lot easier, because you can do it from the comfort of your home, and it doesn’t cost you a thing. There two most popular platforms right now are:

Both offer free accounts. On roll20, after creating an account, go to Games in the menu, and click ‘join a game’. Set your preferences and sign up for a game. That doesn’t mean you’ll be accepted though. So sign up for several games and if you get accepted for more than one, great. Now you can choose which one you like most.

For Fantasy grounds you’ll need to download a demo. After that, go to the forums and go to ‘game organisation’. There you can find and apply to groups.

A downside of online play is that you might be rejected for a group a couple of times before you get in. Don’t take it personally. There are just a lot more players than Dungeon Masters who organise games. Also, many games require a microphone.

If you can get in, it is a very nice way to learn the game from people with experience. And doing so from your own home can be less intimidating.

If you are less shy and want to be a Dungeon Master, you can just state that you’ve never played D&D before and would like to run a game. Within an hour or two, you will have a full set of players. If you take this option, I recommend starting with only four players. And it’s great if you have one experienced player in the group who can help out. There is something to be said for everyone being a noob, because you can find out stuff together.

4. Sit in on a D&D Game Without Playing

Here’s an great option that many starting D&D players overlook. Many DMs have a limit on the number of players they allow in a game. If a group has been together for years, they might not allow anyone new – experienced or not – to join. But almost every group I know has zero problems with allowing to watch them play. And you can ask questions during play to get a handle on the game. You can really get a sense of the atmosphere and excitement this way.

Of course, you can also do this online. If you are just watching you don’t even need a microphone. In Roll20 for instance, you can just use text to ask a question or not type at all and watch the fun unfold.

5. See if a Solo D&D Adventure is Fun for You

But if none of that’s for you, and you just want a quiet way to play Dungeons & Dragons at your own pace, buying a solo adventure might be the right thing for you. I really enjoyed playing the Avalon’s Solo Adventure System:

These solo adventures are for D&D 5e and can be played alone without a Dungeon Master. What I like about solo adventures is that you can take all the time you need to learn the rules and pause or redo a scene if you don’t like how you’ve handled things. It gives you maximum control over your gaming experience.

This might not seem like an obvious one, but Dungeons & Dragons has produced a ton of Novels. And I do mean a TON. There are so many novels you’ll be hard pressed to read them all. (Don’t even try). But the great thing about these novels is that they are all set in the various D&D settings like Greyhawk, Forgotten Realms, or Ravnica. You’ll meet the famous heroes and villains of these realms and can get a feel for what type of setting you might enjoy.

Also, these novels are – admittedly – mostly not pieces of literature. They are fast-paced and written to emulate the fun and action of Dungeons & Dragons.

7. Play a Fun Easy Single Page RPG With Your Friends

This is an option I’m really excited about. D&D is a really fun game for those looking to create a long term immersive gaming experience. But it’s also quite a commitment. You need to buy books, learn the rules, create characters, and prepare a story. That’s a lot if you’re not even sure you want to even play. Is there no easier way to try out a tabletop RPG with your friends?

There are a ton of free one page Roleplaying games with simplified rules that you can learn in minutes and that requires no preparation. Just get together with friends, create characters in about five minutes and start playing right away. Here’s one example: 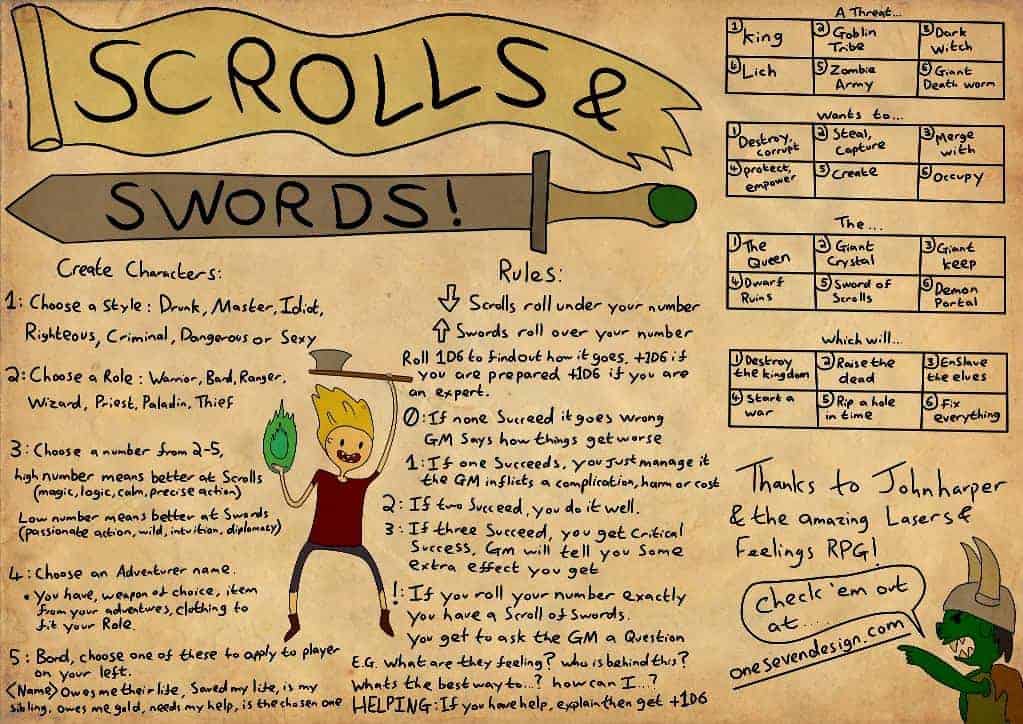 You can listen to an example of play here.

These types of games have just enough depth to enjoy for several games, and because they’re so rules light, you can just focus on the story. This makes it much easier to run as a Dungeon Master. If you enjoy roleplaying, you might want to switch to the more beefier game that is D&D. For this we go to the my final suggestion.

8. Go all in and Buy the D&D Starter Set

If you plan to be the Dungeon Master or are lucky enough to have a friend who is willing to try, I cannot recommend the D&D starter set enough. It is designed with new players and dungeon masters in mind. It will take players from level 1 to 5 and has lots of variety. I was sceptical at first, but I’ve played it and think it is great value for money.

As promised, these were 8 ways to see for yourself if D&D is fun. I hope you will try out one or more of these suggestions. And if you enjoyed this article please hit the share button below so your friends can get excited about the World’s Greatest Roleplaying Game.