Puzzles are great. Dungeons are fantastic. And putting puzzles into your D&D dungeon is a great idea. But where to start? Well, there are several ways to create a D&D puzzle dungeon. I should know. Since I’ve started playing D&D I’ve put thousands of puzzles into dungeons. And dragons of course, but we don’t talk about those. (There was an accident, it was messy).

In this article we’ll discuss the various ways of putting puzzles into dungeons. And yes, there is more than one way. Each method has different pros and cons. So let’s delve right in and find the puzzle that works for you.

Filling Your D&D Puzzle Dungeon with Levers and Pressure Plates

The first method is by simply sprinkling various levers, pressure plates, bookcases that open when you pull the right book, and all kind of other switches throughout your puzzle dungeon. These levers and such are called ‘keys’. Of course, they are not literal keys. But I like to call them that anyway because they are the key ingredient to that step of the puzzle.

Most keys like a lever can be ‘turned’ immediately. A PC pulls the lever and a secret door opens, revealing a new section of the puzzle dungeon. But you can increase the difficulty of your dungeon puzzle by separating the ‘key’ and the ‘key hole’. For instance: A PC might find a square hole in the wall (key hole) and remember the square level lying in the room besides (key). Only after placing the lever in the key hole and pulling it, does the secret door open.

The first step in designing your D&D puzzle dungeon is to place all the keys in their keyholes and check that PCs can go from room to room while solving the puzzles.

The second step is to pull some of those keys out and place them in rooms the PCs already have access to. It’s very important that you don’t accidentally place a key in a room characters can’t reach. You can hide keys in drawers underneath the bed and so on. But I like to add them to the room description. That way, observant players often remember having ‘seen’ the key piece somewhere before.

If you don’t want your puzzles to feel too linear, you can have PCs turn two or three key pieces at the same time, or in a specific combination. For instance, if all three torch holders are turned to the left the fire in the fireplace dies revealing a room behind. Or players must step on pressure plates in a specific order.

Using multiple keys this way is still every bit as linear as using on key to progress to the next section, but it feels less linear to players. You still get maximum control of where PCs go, while they are running back and forth between rooms that contain the keys.

And that’s another great benefit of using puzzles. It forces players to explore every bit of your dungeon. Have you ever spent hours carefully crafting a fifteen room dungeon with elaborate descriptions and stories for each room, only to have the players take the most direct route to the Dragon? It really bites when you see all that work go to waste. But when you use puzzles in your dungeon, PCs have to explore the entire dungeon before they can open the final ‘Boss door’. And the best part is, they won’t mind you forcing them. It’s a natural part of the story.

Laying out puzzles in different areas of a dungeon is an art. And I’ve written a special article on it on this site. You can find it under the heading ‘layering D&D Door Puzzles’ here.

Now, levers, pressure plates and such are all fine and well. I’ve used them many times. The pros are that they are easy to use and go with most themes. But on the con side, figuring out the sequence in which levers must be pulled through trial and error is hardly a real puzzle. Players just try every combination and move on. That’s why I’ve built some more challenging and immersive puzzles to fill out your D&D puzzle dungeon.

The first puzzle I would like to discuss is aptly named ‘Dungeon Puzzles‘. But this isn’t a puzzle you simply put into your dungeon. Instead, the entire dungeon IS the puzzle. How does it work?

I’m sure you can come up with plenty of other reasons why PCs could find a fragmented map. Fact remains, that the door to the dungeon remains magically closed until they can draw the proper layout on it. Now for the cool part:

Players receive a deck of cards with pieces of the dungeon. The cards are four by four inches. They lay out the pieces in exactly the same way as the fragmented map and may only rotate them in their place until all the hallways and rooms line up, leaving no open ends. When they finish the puzzle they draw the outline on the door and are able to enter. Now for the REALLY cool part:

Once the players have solved this Dungeon puzzle, it immediately doubles as a map they can move their miniatures on. Effectively, the players have set up the map for you while solving the puzzle. All the DM has to do is add some doors. 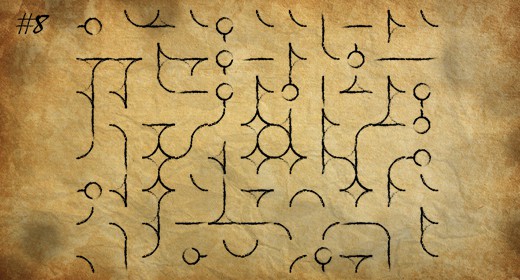 This puzzle comes in both tabletop and VTT format. You can also use the deck as a random dungeon generator without the puzzles. So it has lots of replay value. There are 25 premade puzzles in the pack, but you can create your own puzzles easily.

A con of this puzzle is that PCs must solve it before even entering the dungeon. That’s why I’ve created a smaller version with vines or magic rays that you can place in a dungeon instead. Players must complete the pattern in the same way, to open a door etc.

Pros are that you have the dungeon layout ready, it’s a cooperative puzzle. There are many easy steps to the puzzle, so given time players hardly ever get stuck, and you can use these puzzles throughout your campaign giving it a unique feel.

Rune Puzzles are very versatile. You can use them to lock door, treasure chests or even levers and pressure plates and such. You can even place a line of runes on the dungeon floor creating a field of force PCs can’t cross.

The Rune Puzzle itself is a line of text the players must first translate. Once translated they must solve the anagram which reveals a cryptic description of an object. Speak the objects name or hold it against the runes and the runes dissolve.

You can think of the rune puzzle as the key hole. And the rune letters are the keys. Hide those key throughout the dungeon so players must first collect them before being able to solve the puzzle.

I don’t think this puzzle has any cons. They are just so darn easy and require little to no preparation. Just place a puzzle on the door you want to lock and let the players figure out the rest while you reread the dragons stats. There are 30 rune puzzles in the pack.

These puzzles are very much like the Rune puzzles I’ve mentioned before. They are perfect for building a D&D puzzle dungeon. If you wish to lock a door, simply place a floor puzzle on the floor of the room before it… and your done. That is really all there is to it.

Players can solve the floor puzzle by walking the correct pattern across the tiles. I’ve added lots of flavour with several tavern card games that connect to the puzzles. But those are optional. You can just use the floor puzzles instantly.

Cons: the room must be large enough to contain the floor puzzle. And if you haven’t used the card game before, you must explain the rules of the puzzle somehow.

Pros: Those card game only last five minutes each and are a lot of fun. And they also teach the rules of the floor puzzles without players realising. Only when they encounter the floor puzzle will they remember the card game they played earlier and be able to figure out what pattern to walk. That usually gets a few oohs and aahs at the table. There are 20 puzzles in this pack.

All of these puzzle pack can be bought individually in my Dungeonvault webstore. But if you want the best deal, consider getting the vault bundle. It contains over 180 puzzles and lots of other stuff for a massively reduced price. I’ve only given you three examples for filling your D&D puzzle dungeon. But most of the puzzles in the vault bundle could be used for creating a puzzle dungeon so be sure to check it out.