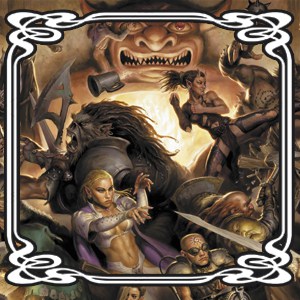 I’ve been playing D&D for a long time. But apparently, I’m not the only one. There is an ever growing number of Dungeons & Dragons players out there. But, how many D&D players are there worldwide?

Wizards of the Coast claims that over 50 million people have played dungeons and dragons worldwide. There are currently an estimated 13.7 million active tabletop D&D players worldwide. Since the inception of D&D in 1974, that number has continued to grow.

Of course, estimating the number of active D&D players is not easy. So I did a little research and here is how I’ve calculated my estimate.

Gathering Data on the Number of Active D&D Players

The first place to look when trying to estimate the number of active D&D players is by asking Wizards of the Coast; the publishers of D&D. I couldn’t find anything on their website, so I send them an email.

I’ll update this post when I get a reply. But it did make me think. Would WotC even know? Is it even possible to estimate? The more I thought about it, the more impossible it seemed. Of course, that wasn’t going to stop me from trying to make an educated guess, or at least, a stab in the dark.

The earliest estimate I could find is by Gary GyGax. In 1987, fifteen years after Dungeons & Dragons first came out, Gygax estimated about 5 million people actively played D&D. Of course, Gygax probably had to make his estimate on sales numbers.

In 2004 BBC news estimated about 20 million had played Dungeons & Dragons since it was created. A much more recent and reliable estimate was mentioned in 2017 by the president and CEO of Wizards of the Coast. On Twitch he did a talk on Dungeons & Dragons and other WotC products. In this video, he mentions that according to their last survey, Dungeons & Dragons 5e edition is played by about 9.5 million people actively. (Watch here at player count 27:30)

But this only mentions D&D 5e tabletop players. What about D&D players who play D&D online or through virtual tabletops like Roll20 or Fantasy Grounds? And the number also doesn’t account for D&D players who are playing earlier versions of the game.

The Number of Online D&D Players

This number is really hard to estimate and as a result, I may be wide off the mark. But let’s look at some data first. Each quarter the virtual tabletop platform Roll20 puts out an industry report. 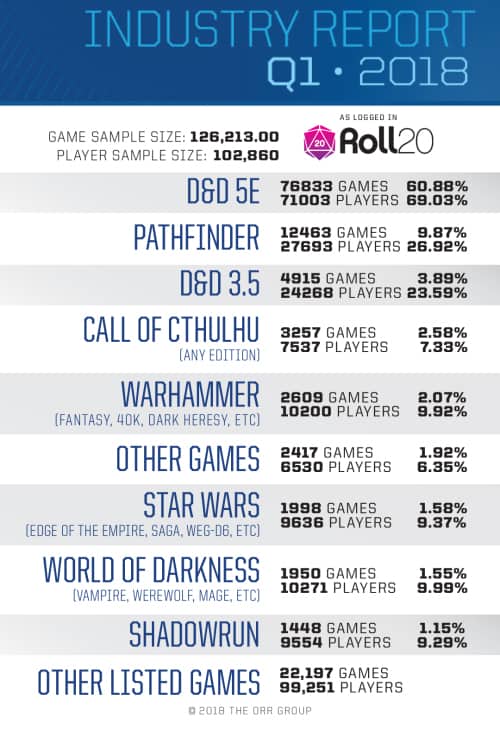 Of course, Roll20 isn’t the only VTT platform out there. How does it compare to other big VTT platforms? We can get a rough estimate by consulting Google Trends.

Google trends shows that Roll20 is a major player for online Dungeons & Dragons players. Looking at the industry report the vast majority of those games are some version of D&D.

The Roll20 industry report gives us some insight into how D&D players are divided across different Editions of D&D. Using this division and the estimate of active 5e Edition D&D players by the CEO of WotC here is a very rough estimate:

Of course, online D&D players and VTT players may be divided very differently. It’s probable that the older generation that plays AD&D isn’t as likely to play D&D online as the younger generation. And a small difference in numbers can cause a massive miscalculation when estimating millions of players.

On this website we sell products for both VTT and regular Tabletop. Over the years I have noticed an increase in VTT sales. But not everything changes. It’s interesting to see that products focused on classic dungeoncrawls such as our Dungeon Puzzles and Lock Puzzles are still more popular than others.

Is Dungeons & Dragons’ Popularity On The Rise Or In Decline?

These are numbers from 2017. I’m writing this article in 2019. Which begs the question; will D&D become more popular in the future? Here Google Trends can again help us.

Also, take into account that the world population has grown during this period and it’s safe to say that the number of D&D players will definitely keep rising in the future.

In the interview in Twitch, the CEO of WotC also mentions that over the years they have produced over a hundred PC games for Dungeons & Dragons.

I could not find any data on how many D&D players are playing PC games online or otherwise. And there is also no telling how many of these players are both playing tabletop D&D and a PC game.

Also, an argument could be made that while PC games are D&D themed, these players aren’t actually playing D&D as envisioned by its early creators. The same goes for board games, card games, and other D&D related games. Since I have no data and – while fun – you might not even call these games traditional Dungeons & Dragons, I am not going to count them.

The same goes for D&D players who play traditional D&D through an online format. Yes, Roll20 produces some figures. But there are so many ways to play D&D out there. People use forums, email groups, discord, skype, google hangouts and so on.

Plus, it’s impossible to know how many of these active online players are also in tabletop D&D groups. So rather than give a wildly inaccurate number. Let’s just say we don’t know.

Some things shall forever remain a mystery. And isn’t that just like Dungeons & Dragons is supposed to be?

How Many Dungeon Masters Are There Worldwide?

In What Countries is Dungeons & Dragons Most Popular?

According to Google Trends Dungeons & Dragons is most popular in:

3 thoughts on “How Many D&D Players Are There Worldwide?”