You want to use sphinx puzzles, pyramid puzzles or both in your D&D campaign. That’s a great idea. Thematically, both sphinxes and pyramids go together perfectly with puzzles. Meeting a sphinx turns a monster encounter into a puzzle challenge. And when players explore a pyramid they need to puzzle out how it is laid out first. So using puzzles makes a lot of sense.

In this article, we’ll look at puzzles you can use with sphinxes or pyramids. You can use these separately, or combine them for more of an ancient Egyptian themed D&D adventure.

It goes without saying that D&D did not come up with sphinxes as monsters. They are a part of both mythology and modern religion. In south and southeast Asia a sphinx has the head of a human and body of a lion. In South India, the sphinx is known as purushamriga (Sanskrit) or purushamirugam (Tamil), meaning ‘human-beast’. It is said by the tradition, to take away the sins of the devotees when they enter a temple and to ward off evil in general.

When using a sphinx in your game, you don’t have to stick with the Greek version that is most widely known. But for D&D puzzles the Greek version is perfect because of the riddles it challenges travelers to puzzle out.

In Greek tradition a sphinx has the haunches of a lion, wings of a bird and head of a woman. She kills and eats those who can’t answer her riddle. Supposedly the sphinx asked the following riddle:

“What goes on four feet in the morning, two feet at noon, and three feet in the evening?”

The answer to this puzzle riddle is ‘human’, because they crawl on all fours as babies, walk upright as adults, and the elderly need a walking stick. The problem with this puzzle is that you can’t use it in a D&D setting. After all, there are a great many creatures that would fit the bill. Also, from a designer’s point of view this isn’t a great riddle.

So how can you tell if a riddle is bad? If you hear the answer and you don’t say to yourself ‘But of course! That’s the ONLY possible correct solution!’ then it is a bad riddle. A riddle should have only one unmistakable correct answer and leave no doubt in the mind of the player of whether they have solved it or not.

Unfortunately, a lot of riddle puzzles on the internet are guilty of this design flaw. It always bugged me so I created a system for riddles that have just one clear answer. Here’s an example: 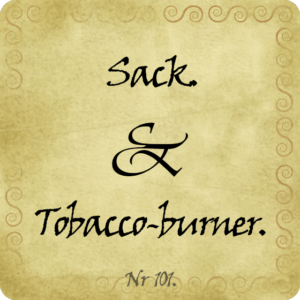 All puzzles in this deck are comprised of two words that mean something on their own or form an expression, like: fireball, fool’s gold or touch wood.

Each riddle puzzle contains two cryptic lines which describe the two words. Different words for ‘sack’ could be: bag, carryall, purse, etc. A ‘tobacco-burner’ could be a: cigarette, pipe, cigar, etc.

On their own cryptic words have many meanings, but combine two words and there can only be one correct answer. For instance, while ‘purse’ and ‘cigar’ are both options, no one’s ever heard a purse-cigar. But ‘bag’ and ‘pipe’ do make up the combined word bagpipe. There is only one correct answer to each riddle.

Of course, having just one clearly designed riddle won’t get you very far. So I created a deck of 101 riddles for tabletop and virtual tabletop use. Whenever you need a riddle, you simply grab one from the stack and they always have just one unambiguous answer.

If you are going to use pyramids in your game, it’s important to note what makes them special. The most well-known pyramids hail from Egypt and go well with the Egyptian riddle asking sphinx. But pyramids have been found all over the world. Most pyramids are burial monuments. Their shape suggests the pyramid may have been designed to serve as a means to magically launch the deceased’s soul directly into the abode of the gods; a physical gateway to the heavens. Pharaohs were often buried with all they needed including servants and pets. Also, the entrance was hidden.

From a design point of view, you might want to use a pyramid not only as a dungeon but also as a means to teleport to a different plane of existence. However, while real-life pyramids have only a few chambers, that doesn’t leave players with a lot of room to explore. Instead, I would start them out on the ground floor in a large square dungeon. From there they have to puzzle out how to get to the next level of the D&D pyramid. And of course, servants and ‘pets’ might try and stop them along the way before they find the ‘mummy’. And no, I’m not talking about someone’s mother.

For a puzzle setup, I recommend using dungeon puzzles. With dungeon puzzles, players receive only a fragmented map of the lowest level of the dungeon. How they find these clues is up to you. Perhaps the sphinx traded them the clues for answering a riddle, they spoke with the dead, gained insight through divination, or studied clues in a library.

From the fragmented map, players can puzzle out the layout of the ground floor. The puzzle comes with tiles players can use to solve this puzzle. And once they have, you can immediately use the tiles as a map of the dungeon. So really, your players are laying out the map you play on for you. And the pyramid IS the puzzle.

With this puzzle, the players start off with a fragmented map where all the hallways and intersections of the pyramid are facing the wrong direction. You could have the blocks of the pyramid magically realign themselves when players solve a puzzle. That way players can hear stones grinding and feel hallways shifting as they solve the puzzle. It creates a much more interactive environment.

A third puzzle that isn’t directly connected to sphinxes and pyramids, but really fits the theme is laser puzzles. With laser puzzles players find multiple four-headed lion statues that speak to them telepathically. They must connect light beams (or lasers) shooting from the eyes of the statues in the correct way to solve the puzzle. Placing these puzzles in or around your pyramid works very well. And the lion theme goes nice with the lion body of the sphinx.

If you are interested in any of these puzzles, please be sure to check out the Vault Bundle. It contains all the puzzle packs and many extras currently in the web store at a drastically reduced price. So be sure to check that out.